The Future Of India’s Gold Industry The authors present a snapshot of policy framework for gold in India over the last 27 years and look at the possible directions in policy going forward.

India is the world’s second-largest consumer of gold. However, unlike China, the world’s largest consumer of gold, India imports all of its metal, paying for it in US dollars. Gold is among the country’s top five imported goods, where overall imports exceed the value of overall exports. The government thus, strives to strike a fine balance between the quantum of gold imports and the need for US dollars for the rest of the economy.

Until 1991, the import of gold was prohibited. However, 1992 heralded the biggest change towards a market-driven economy. By 1994, non-resident Indians (NRIs) were permitted to bring in gold, subject to certain quantitative limits. This marked the beginning of gold imports into India.


THE FIRST DECADE OF THE 21ST CENTURY WITNESSED SIGNIFICANT DEVELOPMENTS IN THE MARKET, WITH THE LAUNCH OF NEW PRODUCTS.

This period witnessed major reforms and developments in the gold markets in India. First, the government permitted gold to be imported through designated state agencies such as MMTC and State Trading Corporation. Later, the government permitted certain banks to import gold on a consignment basis. The list of agencies permitted to import gold was expanded to include export houses and star trading houses. By 2000, there were about 50 nominated agencies comprising government trading companies, banks and export houses, which were allowed to import gold. This structure helped alleviate supply constraints and resulted in significant drop in the premium on gold in India.

The first decade of the 21st century witnessed significant developments in the market, with the launch of new products. First, regulated, electronic, nationwide multi-commodity exchanges came into being in 2004. These institutions listed gold and silver futures contracts. As these exchanges traded 1 kg 995-fineness gold futures (and 30 kg silver bars) in Indian rupees, they became very popular and volumes picked up within a short period of time. With a reference price available, transparency in trade improved and new distribution channels started emerging. In many ways, the trade became more organised. In 2007, India permitted the launch of gold exchange traded funds (ETFs). This too became very popular in a short span of time, despite higher expense ratios. By 2011, there were about 14 asset management companies (AMCs) offering gold ETFs on regulated exchanges managing close to 35 tonnes of gold.

One of the factors that contributed to the growth of the gold market during this period was the secular rise of the price of gold in international markets. This was amplified further in India by currency depreciation. As a case in point, the average price of gold grew from Rs. 5,850.00 per 10 gm towards end of 2004 to Rs. 26,400.00 per 10 gm by end-2011, a whopping 351% jump in seven years. Higher returns drove demand for gold higher during this period, with gold imports crossing US$50 billion in 2011–12. The spike in gold demand, pushed the trade deficit beyond 4% of GDP for the first time. 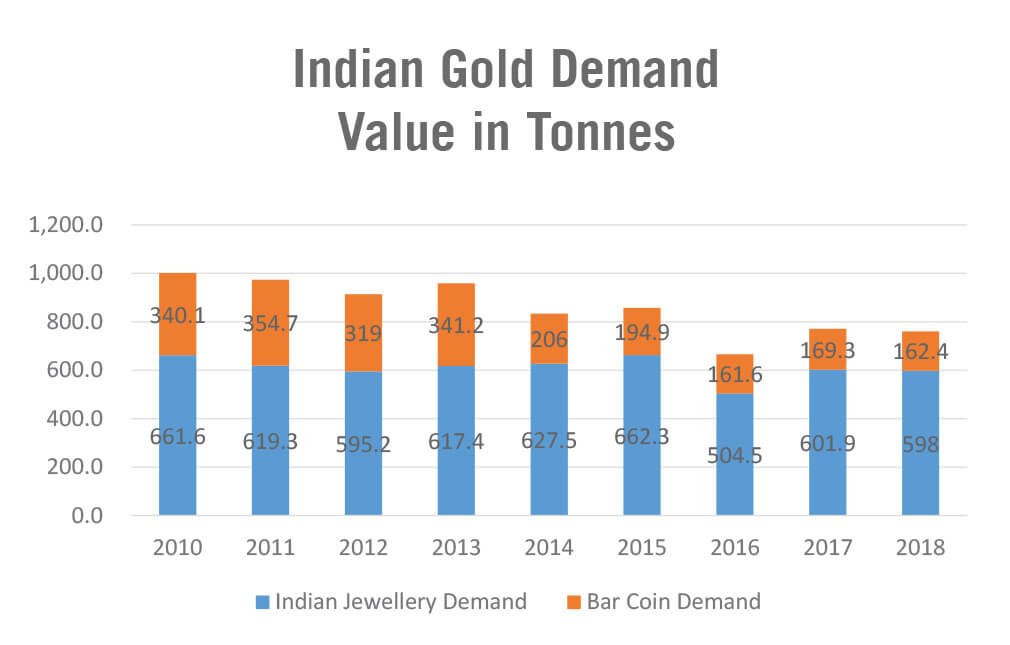 Let’s not forget that underpinning the trading volumes is a significant amount of physical gold held in London vaults. As of April 2019, there was 7,650 tonnes of gold, valued at $315.4 billion and 36,067 tonnes of silver valued at $17.4 billion. This equates to approximately 612,025 gold bars and 1,202,222 silver bars. We publish the information on gold stored across the London vaults publicly on a monthly basis on our website.

Despite the steep increase in customs duty, the quantum of imports did not reduce markedly as anticipated. So, in August 2013, the country began a quantitative restriction plan famously referred to as the “20:80 scheme”, whereby it linked gold imports to the export of value-added gold products to an extent of at least 20% of imports. This had the desired impact of curtailing gold imports immediately. However, it also had two major negative effects: the channels of import were restricted to a select few, thereby increasing the premium on gold, and the higher customs duty coupled with quantitative restrictions gave rise to a parallel market in gold.

The government also thought it fit to develop the gold refining industry and thus incentivised the import of gold dore with a duty differential of 2% in favour of dore. Only licensed refiners were permitted to import dore, and only directly from mines of the producers.


THE INTRODUCTION OF A GOODS AND SERVICES TAX (GST) IN 2016 AND THE PUSH FOR DIGITISATION POST-DEMONETISATION ARE TWO KEY DEVELOPMENTS OUTSIDE THE GOLD INDUSTRY THAT HAD MANY BENEFICIAL IMPACTS ON THE SECTOR.

In April 2014, a new government came to power. As a first step, it abolished the 20:80 scheme. The government also felt the “import and consume” model had to be capped at a manageable level. On 5 November 2015, three new schemes were launched. To tap gold kept in private households, temples and trusts (conservatively estimated at 20,000 tonnes) and reduce the reliance on imported gold, the government announced a Gold Monetisation Scheme (GMS) (see Box 1). To discourage the purchase of physical gold for investment purposes, the government launched a sovereign gold bond scheme (SGBS) with tax-free interest and a tax waiver on capital gains (see Box 2). Third, the government launched a gold coin programme to utilise gold accumulated under the GMS. In the past four years, GMS has only gathered about 15 tonnes. SGBS, although more successful in gaining participation in tier-2 and tier-3 cities, have not been able to gain substantial volumes. India Gold Coin, a pride of India, is still to attain critical mass.

The introduction of a Goods and Services Tax (GST) in 2016 and the push for digitisation post-demonetisation are also two key developments outside the gold industry that had many beneficial impacts on the sector. GST drove compliance and transparency, while digitisation lead to the evolution of “digital gold”, which has amassed over 70 million investors in just three years.

The government has also realized that the gold sector is vital for employment generation, as 60% of gold goes towards jewellery making, a sector that employs over 5 million people. Through a consultative process with industry stakeholders government think tank Niti Aayog published a comprehensive report titled “Transforming India’s Gold Market”, with recommendations to develop the sector. They include: (i) setting up a gold board – an agency responsible for all policies pertaining to gold, (ii) setting up a domestic council – a multi-stakeholder advisory body to the government, (iii) establishing India Good Delivery Norms along the lines of global Good Delivery Standards, (iv) establishing a Spot Gold Exchange, (v) relaunching the gold monetisation scheme, (vi) permitting commercial banks to operate as full-fledged bullion banks, (vii) opening centres to train artisans, (viii) upgrading and modernising technology infrastructure in manufacturing clusters for gold jewellery manufacture for exports, (ix) protecting consumer interest and upholding quality through a compulsory hallmarking programme, and (x) expanding and deepening India’s presence in global gold jewellery exports.

Of these, a Domestic Council has been established, India Good Delivery norms have been finalised and are awaiting final clearance for implementation, and a timeline has been announced for transition to compulsory hallmarking. Work on the other areas are being aggressively pursued.

In summary, over the past 20 years, the Indian government has changed its view on gold from being a means of savings by the poor to a non-essential revenue balancing item on the budget. Thus, while it accepts gold imports within certain limits, it wants its share of revenue as duties on imported gold or gold dore. The industry is fine with this, provided its operations do not suffer from the import of illegally smuggled gold.

The industry is keen on the government moving forward with its reform agenda for the sector. The industry has evolved a new way of working together (see Box 3) and is aligned with the priorities of the government. As such, stakeholders should work together to bring most of the recommendations to fruition in the next two years. With an industry driven by regulated institutions based on globally accepted norms of transparency, traceability and consumer protection principles, the future of India’s gold industry looks bright.

GMS was announced in the Union Budget speech of 2015-16 and was formally launched by Prime Minister Narendra Modi on 5 November 2015. The scheme replaced the existing Gold Deposit and Gold Metal Loan schemes. The scheme has several aims:

SGBs are government securities issued by the Reserve Bank of India (RBI) on behalf of the central government and are denominated in grams of gold. SGBs were launched in 2015 with a view to shift retail investment from physical gold to paper gold. The scheme focuses on retail investors who prefer to invest in physical gold. The bonds carry a tenure of eight years, with provisions of premature redemption option after five years as well. These bonds are issued at the prevailing price, as notified by the India Bullion Jewellers Association to the RBI. The bonds carry an interest of 2.5% per annum, paid semi-annually. Retail investors can invest only up to a certain amount in SGBs.

From 2015 to 31 March 2019, the government issued SGBs 27 times, with investors buying 25 million of units of 1 g each (roughly 25 tonnes of gold). SGBs took a lot of volume out of gold ETFs, at it offered better incentives. However, the SGB secondary market is not yet mature. Recently, the Reserve Bank of India started buying physical gold to cover SGB exposure to price risk.

World Gold Council (WGC) India India has been able to provide thought leadership as well as act as a critical bridge between policy makers and various industry associations. WGC has played a pivotal role in three important areas: publishing white papers on the reform agenda; mobilising industry associations to be proactive about reform; and providing financial support for the establishment of critical transformative infrastructure.

WGC India led the discussion on several important issues pertaining to gold industry reforms. It was WGC India that published a white paper on India’s need to have a comprehensive gold policy, pushing the government to pursue the agenda through its policy think tank, Niti Aayog. Likewise, WGC India has published several important discussion papers on topics such as “Blueprint for Spot Gold Exchange in India” and “The Need for Bullion Banking in India”. Most important is the process WGC has followed on each of these initiatives. Each of the research papers was issued after a series of deliberations by a steering committee comprising representatives from leading associations in India, overseas experts and stakeholders. For instance, “Blueprint for Spot Gold Exchange in India” was the culmination of efforts of a 27-member steering committee comprising stakeholders across the industry. Such an approach, although time consuming, results in broad consensus among industry players.

WGC is the sponsor of the India Gold Policy Centre (IGPC) at the Indian Institute of Management, Ahmedabad. IGPC aims to create a robust knowledge base on the gold sector to provide the government of India with policy inputs. Within a short span of four years, IGPC has grown in stature and is providing critical policy inputs to the government. WGC India, along with MMTC PAMP India, set up the Precious Metals Assay & Training Institute (PMATI) in 2018 to train stakeholders on assaying and hallmarking through a structured classroombased training programme and hands-on laboratory sessions. The aim is to provide skilled manpower the industry needs in the future. WGC India plans to support many more of such initiatives in the future. 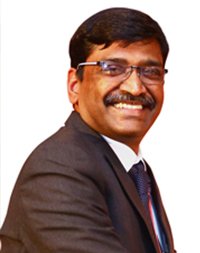 SRIVATSAVA GANAPATHY is President of Foretell Business Solutions, a role he has held since 1998. He has a vast understanding of commodity markets, particularly precious metals. Under his leadership, Foretell organises conferences like India International Gold Convention, Global Gold Dore Forum and the Asia Pacific Precious Metals Conference with SBMA. Foretell has similar business interests in cashew and sesame. For more details visit www.fbspl.com.

Next Article
Back to Index