As the world’s fourth most populous country, Indonesia has become the focus of many global firms and industries. With more than 270 million inhabitants spread out across 34 provinces on seven big islands, the country is considered Southeast Asia’s economic engine. Although it has favourable prospects for sustainable businesses and is forecast to be among the world’s four largest economies by 2030 (Economist Intelligence Unit), the country is still considered a blank canvas for many global firms, including gold industry players, due to its unclear regulation, sophisticated demographic segmentation, and lack of information of the industry landscape.

A large share of Indonesia’s population will be of working age in the coming decades – what is known as the demographic dividend or the demographic bonus – giving it a competitive advantage compared to more developed countries facing an ageing population. The size of the country’s economically active population – aged between 16 and 65 – is growing and expected to peak at 70% of the total by 2030. The median age of Indonesia’s population is currently 29.7 years old – an attractive proposition for any business (fig.1).

Gold jewellery’s main consumer demographic – females from 20 to 54 years old – comprises around 26% of the population, or 69 million people, which is more than Italy’s total population and almost 12 times of Singapore’s total population. The income of this population is also growing along with the share of employment of the total female population (from 45% in 2011 to 50% in 2019, according to the Indonesia Statistics Bureau). Additionally, the minimum salary has also increased significantly in the past 10 years. For example, in Jakarta province, it has grown almost fourfold from IDR 1.11 million (US$79) per month in 2010 to IDR 4.27 million in 2020.

The country has another competitive advantage: its growing middle class, fuelled by rising incomes. In general, Indonesia’s population is divided into three segments: upper class, middle class, and lower class, with the majority falling into the lower-middle class segments. The middle class is estimated to comprise 62% of the population, having grown by 47 million in the past three years (fig.2). There are four significant behavioural differences within each socio-economic class. The upper class can be divided into the higher and the upper middle sub-economic class to differentiate behavioural patterns. Unlike more developed countries, which have more uniformity in behaviour, consumers in Indonesia have more diverse preferences. As such, engagement channels that introduce the product or service, variety of product price and quality, and buying channels, vary widely for each social class (fig.3).

According to Metals Focus, Indonesia’s gold jewellery market size reached 40 tonnes in 2018. Gold jewellery purchases among consumers fall into two categories: investment and fashion. Gold jewellery with cubic zirconia stones are popular in Indonesia, as the lower and middle classes cannot afford diamond jewellery, but want a similar look. While the gold consumption figures of each social economic class is not known, the figure for the lower class can be biased as the same product can have a turnover of six to eight times among retailers and consumers (fig.4)

Upper class consumers typically choose 99.99% fine gold bars for investment and diamond jewellery as their main fashion purchase. They also buy plain gold jewellery, usually 18K, in the form of curb chain necklaces, chokers, and hoop earrings. In contrast with the upper class, the lower class segment combines investment and fashion purchases, and has a preference for 8K–10K gold jewellery, followed by cubic zirconia jewellery with the same range of gold content. The behaviour of the middle class segment is a hybrid of the upper and lower class. They have a preference for cubic zirconia jewellery with gold content in the range of 17K–18K. However, for big occasions such as weddings, they usually buy the most affordable diamond wedding rings (fig.5).

The gold jewellery industry in Indonesia is still considered a blank canvas compared to other consumer-focused industries. The biggest challenge in the gold industry is the lack of standardisation of gold content, with the majority of gold jewellery distributed across the country containing less gold than their manufacturers claim. In 2020, authorities will introduce a national standard reference for gold jewellery content from 8K to 24K. However, much remains to be done in terms of implementation, as the standard will only be a guideline and not mandatory. In addition, enabling infrastructure, such as an independent institution to monitor gold content that can be used by gold shop owners and small-medium-enterprise gold entrepreneurs across the countries, is not available.

Another unique trait is the high buy-back rate of gold jewellery in Indonesia, particularly among gold shops that serve the lower class segment. Consumers in this segment trade in their gold jewellery more frequently (i.e. monthly or weekly). Such behaviour makes the business model for gold retailers more akin to that of a pawnshop than a commercial trade shop, as 50–80% of the products they sell return to them in a short period of time.

The third challenge – especially pertinent to manufacturers – is providing products with a wide range of gold content, as different regions have varying product preferences. For example, Java – an island that is home to 52% of Indonesia’s population – has 8K, 9K, and 10K gold jewellery for the lower class and 17K (yellow gold) and 18K (white gold and rose gold) for the middle class. However, 20K gold jewellery is preferred on islands such as Borneo (Kalimantan) and 21K gold jewellery is preferred in Celebes (Sulawesi).

In summary, Indonesia is a promising country with a huge business opportunity, including in the gold jewellery sector. However, knowing how to engage with consumers across all touch points and having strong relationship with stakeholders, from the government to the small retailers across all geographies, are critical to growing the business sustainably in this emerging market. As the newest gold jewellery player in Indonesia, SKK Jewels has been welcomed by all industry stakeholders in the country. We take pride in our Hala Gold brand, which is built following our principles of being honest, authentic, lasting, and aspirational. As the first and the only gold jewellery manufacturer in Indonesia with certified gold content from the Ministry of Industry, SKK hopes to pioneer good industry practices. With this certification, SKK can put the Indonesian National Standard (SNI) mark on all our collaterals, which goes a long way to fostering trust in our brands. We also focus on producing innovative and authentic designs, and strictly prohibit our factories from producing counterfeit products or copying the designs of other factories.

SKK aims to provide a lasting product for our consumers. Our product craftsmanship has been recognised for its quality, which has been compared to diamond jewellery. We maintain high standards of quality control to ensure our gold jewellery products stand out from the competition. This has been a key success driver for our brands, and has allowed the public to acquire 18K gold jewellery with high craftsmanship at affordable prices.

Our last innovation, considered a breakthrough in Indonesia’s gold jewellery industry, is in creating an aspirational brand with a unique identity and precise consumer targeting. We have partnered with top local celebrities to grow our brands over its lifetime, which has created high brand awareness and trust from consumers. Our limited edition series have also created high demand and hype among retailers and consumers. As a result, the organic #HalaGoldHunter movement has grown among consumers who are fans of our products and appreciate our brand values.

Strong engagement from authorities, retailers, trendsetters and consumers, who have also become our advocates, are helping us educate the public on the importance of standardised gold content and high-quality gold jewellery products. This mutually beneficial ecosystem works for the greater good, and will only help develop and grow Indonesia’s gold jewellery industry even further. 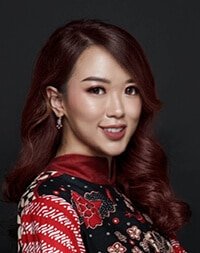 Jennifer Heryanto is the founder and Chief Executive Officer of SKK Jewels, a gold jewellery manufacturer in Indonesia and subsidiary of CMK Group, Indonesia’s biggest diamond jewellery retailer. She led SKK to be the first and the only gold jewellery factory certified by the Indonesia government for trusted gold content. The company has two champion brands – Hala Gold and Sandra Dewi Gold, a partnership with a leading celebrity Sandra Dewi. Heryanto was previously a business leader in the consumer goods and beauty sector.