This year is highly likely to be a year of changes for the investment gold market in Russia: the Ministry of Finance will assess the feasibility of VAT exemption on investment gold, the State Duma will consider a bill to allow citizens to purchase precious metals in individual investment accounts, and the Central Bank will make changes to its pricing policy when conducting its market operations.

Before discussing the impact of these changes on the Russian market, let’s take a closer look at the structure of supply and demand in the context of recent years (see Figure 1). The main suppliers of gold are gold mining companies. Gold production in Russia in 2018 reached almost 314 tonnes, excluding exported gold concentrates. 1 This figure has been steadily growing from 3% to 5% per annum. Fitch also forecasts an additional 4% growth in gold mining for 2019. The largest demand for gold comes from the Central Bank of Russia. At the end of 2018, purchases of gold by the Central Bank amounted to approximately 274 tonnes. Due to the demand from internal purchases and the importance of gold for monetary reserves, Russia reduced the export of refined gold by 3.3 times to 17.05 tonnes in 2018, down from 56.61 tonnes in 2017. 2 Graph 1. Gold Supply and Demand in tonnes in Russia

According to the World Gold Council, the demand for precious metals from individuals in Russia in 2018 was near 2.8 tonnes per year, whereas in China it reached 304.2 tonnes, 162 tonnes in India, and 96 tonnes in Germany. The main reason for such low figures is the current tax regime on physical precious metals. As an instrument of savings, gold is promising, but individuals buying the metal from a bank must pay VAT at a rate of 20%, which is not refunded to the individual investor when he/she sells it. This makes investing in gold unattractive.

The VAT exemption on investment gold in Russia is a promising change that may occur. If this happens, it would lead to a significant change in the structure of the precious metals market, growth in demand for this class of assets among individuals, and a significant increase in market liquidity. Gold as a financial instrument is protected from inflation and can be a good alternative to foreign currency deposits. As such, the initiative fits into the general course of de-dollarisation of the Russian economy. The total volume of foreign currency deposits of Russians for 2018 decreased by 6.3% – from $94 billion to $88 billion – due to a 21% fall in long-term foreign currency deposits (from $58.3 billion to $46 billion).3 In the case of VAT cancellation for investment gold, we can assume that about 3-5% of all deposits can be transferred to savings in gold, or approximately $2.6 billion to $4.4 billion.

The government also pays considerable attention to the repatriation of capital. It turned out that a number of citizens are open to repatriating their capital, but want to invest it not in the banking system, but in gold bars. Russian Deputy Finance Minister Alexei Moiseyev said in an interview with Reuters that he had seen appeals from banks, which reported that many customers are ready to de-dollarise, but need a VAT-friendly mode of buying and selling bullion. Sanctions pressure on Russia, as well as the risks of blocking funds of legal entities and individuals, has created a unique situation for the development of the gold market in the country. Customers are interested in physical gold. They want to transfer a part of their funds, including FX, to gold and to have a liquid asset that is independent of sanctions. This became particularly urgent in 2018.

Russia, the third-largest gold producer in the world after China and Australia, has been discussing for many years the possibility of exempting VAT on precious metals. This year, discussions on this subject will reach the highest level – Prime Minister Dmitry Medvedev instructed the Ministry of Finance to submit proposals on the feasibility of abolishing VAT on precious metals when selling it to individuals. The deadline for execution of the order is April 1, 2019.

The other key change in the gold market is the possibility for citizens to purchase precious metals in individual investment accounts (IIS). Currently, only funds and securities can be considered in IIS. The relevant amendments are included in the bill sent to the State Duma for approval. As of January 31, 2019, 2 million private investors were registered in the stock market of the Moscow Stock Exchange. A significant proportion of them are IIS, designed to stimulate investment in the Russian market by providing tax incentives. As of January 31, 2019, there were 636,600 accounts. Data from an analytical review of the Bank of Russia for the brokerage industry for 2017 to 1Q 2018 suggests that the volume of assets in IIS totaled about 60 billion rubles (S$1.26 billion), about 16% of which is cash and deposits. If the bill is passed, individuals will be able to add gold to their portfolios. It is likely that the Russian gold market will definitely see at least one significant change this year. The Russian Central Bank announced in a press release in February 2019 a change in its pricing policy in relation to market operations with gold. To align the price conditions for the sale of gold to the Bank of Russia with the terms of its sale for export and in other market segments, as well as the formation of prerequisites for the further development of the domestic precious metals market, the Bank of Russia will set a discount to the purchase price of refined gold currently determined daily based on the LBMA Gold Price AM. The discount will begin on May 1, 2019, and its value will gradually increase over the course of the year. Moscow Exchange (MOEX) believes that this change in the conditions for operations will ultimately lead to the diversification of participants in the gold market and will contribute to the development of the exchange market for precious metals.

Exchange trading in precious metals (gold and silver) has taken place on MOEX since 2013. Trading in precious metals is implemented on the technical platform of the foreign exchange market using a unified system of margining and risk management. The National Clearing Center (NCC) acts as a central counterparty, clearing and settlement organisation. The metal is delivered to the metal accounts of the clearing participants opened at the NCC. Post-trading operations include operations with precious metal ingots in the NCC depository in Moscow, as well as the possibility of using precious metals held in the accounts of participants in correspondent banks in London and Zurich as collateral. At the end of 2018, the volume of trade in precious metals in spot and swap instruments amounted to 102.3 billion rubles. Market participants are forty-four banks, including the Central Bank of Russia, as well as twelve brokerage firms.

MOEX is also continuing to develop the liquidity of the exchange market for precious metals and sees potential in attracting the demand of non-residents through the International Clearing Members mechanism. Trading and Clearing members may be separate entities. Trading members have to be Russian residents, but Clearing members can be domestic or foreign. This will allow non-resident organisations to become qualified Clearing members and hold capital directly with NCC, and therefore take less credit risk. It also allows non-residents to have naked access to the Exchange’s systems (through the use of SMA logins) and avoid latency penalties from brokers’ infrastructure.

Moscow Exchange offers customers network connectivity from top financial centres across the globe including Europe, United States, and the Middle East through its global network services. In February 2019 MOEX has launched three new Asian POPs, which now include Singapore, Hong Kong, and Shanghai. Our resilient infrastructure offers globally competitive door-to-door latency and easy access to liquidity using industry standard trading protocols and market data feeds. To develop the investment gold market, we have also signed a memorandum of understanding in April 2019 with the Shanghai Gold Exchange to develop cooperation.

This is an interesting time for gold market in Russia with big changes ahead, and we invite all international precious metals players to use this opportunity and provide liquidity. Buying gold in rubles is a unique tool that combines all the advantages of buying gold for dollars and buying dollars for rubles.

1 Data from the Ministry of Finance of Russia.
2 Data from PKU “Assay Chamber of Russia”
3 Central Bank Report 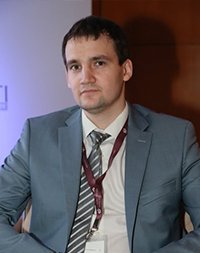 Nikita Knyazev is a director at the Moscow Exchange, focusing on new projects and precious metals trading. He began his career in non-government pension fund Welfare in 2009, in the department of market risks. In 2010 he moved to investment company TKB Capital, where he was responsible for hedging operations in commodity markets and maintaining an options part of structural products as a derivatives trader. From 2015–2018 he was deputy CEO of Ekaterinburg Precious Metal Refinery.